I have been saying we are losing music pubs and music-friendly Landlords at a frightening rate for a while, but now I have some hard numbers - and hard numbers they are to swallow - but if all things remain equal (and they never do), we could have no live music in Kent by 2012.

I have been doing the KentFolk web page since the year 2000, and the fall off in gig numbers is very evident from my data - but my research gets in the way some months, and that causes scatter in the numbers, so for good figures I went to Chris Ashman of www.kentgigs.com and asked if I could data-mine his Gig Archives :

"Hi Beau,
I would suggest that you should look at our lists also in the light of the number of venues that are prepared to pay to promote their events rather than expecting bands to act like "rent a crowd". ......
We can say without doubt this is the worst period we have seen for Kent bands since we started supplying the media in 1981,
Chris"

So I pointed my programs at his gig archive, and this is the graph I get; I plot the number of live music gigs per week in Kent and East Sussex that are listed on www.kentgigs.com over the years Summer 2004 to Christmas 2008 : 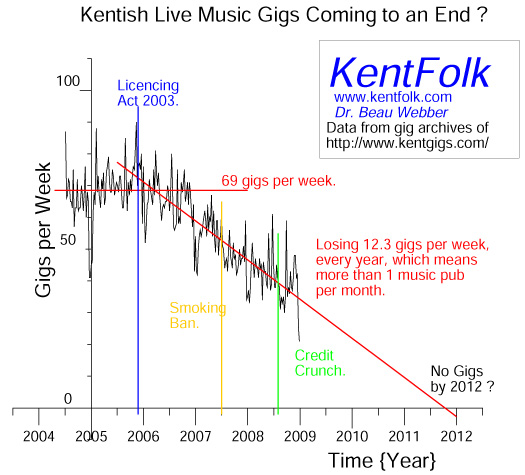 Are Kentish and East Sussex Live Music Gigs Coming to an End ?

At first look we have a quite a lot of scatter, then we can see that in fact some of the variation is a regular dip of some 20 or 30 gigs per week over the Christmas weeks, which makes sense.

But the main feature is that a steady live-gig-rate of about 70 per week has been about halved. What has caused this ? - we can line-up events on this time-graph with major events that have recently happened :

Now I am not one of those who found no merit in the Licensing Act 2003 - I agree the licencing fee takes most of the possible profit from the gigs I sometimes put on, but I do get a piece of paper that makes the gig legal.
However what is totally unacceptable is that it would seem that for the publicans and musicians the scheme is unworkable, such that if everything is equal - and it won't be - we can expect no live music over the Christmas weeks next year (2009) - down from a recent 40 to 50 gigs per week over the Christmas period - and before the end of 2011 live music gigs will be effectively over or too far away to drive to.

There is an urgent need to get this data to those who can make a difference, and also your real stories about publicans who are being thrown out and musicians who are losing their trade - this data is unequivocal :
- The Licensing Act 2003 is destroying live music in one of the most musically active counties in the UK.

However the real question is :
What is it about the Licensing Act that is destroying pubs and the music ?
Suspicions :

Your thoughts ? We need a dialogue on this - a number of people have responded with thoughts ;
many of their suggestions (fewer pubs, etc.) are themselves consequent on the Licensing Act - but why ?
For some of the suggestions there is no obvious reason that their effect should have suddenly have 'cut in' about Christmas 2005 - is there something else that I have not identified that changed then ?
So ask your publican, chat with musicians, invite your neighbour to a pub gig and see what they say .... we need an answer and soon.